Summer doesn’t always provide lots of reading time around here like it does for some people.  With the kids at home, my time is spread thin with their demands and activities, so my time to just sit and read is seriously cut.  However, this June proved itself to be different! I was excited to see that I had outdone myself!

First up was The Immortalists by Chloe Benjamin.  I checked this one out from my local library.  Our library rarely has a wait list on new releases, so I just walked right in and picked it up.  I have seen this beautiful cover over and over on social media, so I was intrigued.  In my typical way, I did not read the jacket or any reviews first, I just got right down to reading.  This is often a mistake, but I can’t always judge whether I will like a book based on what other people say–or the synopsis.  This one is about a set of four siblings who go to a fortune teller who tells them the date of their death.  So enters the question: What would you do if you knew the date that you would die?  Live life out loud, fast and dangerous, or live very cautiously and try to go past that date?  Would it matter?  Watching the effect that the knowledge had on each of the four siblings is fascinating.  I don’t think I would react as any of them did.

The stories stretch over multiple decades, and I enjoyed that aspect.  I was not expecting the first section to be quite so graphic sexually, but I powered through.  Parts 2 and 3 were winners for me.  In part 4, things took a southward turn when monkeys became involved.  I guess I see why they were part of the story, but it was just weird for me.  It was sort of like the last book in a series where things get so weird that it doesn’t even sound like the other books that preceded it.  I gave this one 3.5/5 stars.  There are very few people that I would recommend this one to.

Readers, you know I never have only one book going at a time, so on my commute to 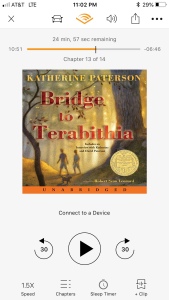 work, I was listening to Bridge to Terabithia by Katherine Paterson.  I’ve had this on my audible account for a LONG time, so I’m sure I got it on sale at some point for cheap.  I listened to this mainly bacause a) I never have read it and b) I wanted to see if it was appropriate for my 11-year-old.  I have heard interviews with Katherine Paterson, and she said that she would not give it to a child that wasn’t ready to read about a kid dying, so me first.  Guys, I was unprepared to cry like that in my car.  Luckily, I was on the way home when I finished.

This is the sweetest story of young friendship and strong females.  I now want to be the Queen of Terabithia myself.  And I want my kids to have their own Terabithia.  I came home telling my daughter that she absolutely needed to read it only to find out that she had watched the movie THE DAY BEFORE!  Ugh.  I’m still going to make her read it.  She said that the death was only mentioned in the movie and that they didn’t actually show the character dying.  Same in the book, but we all know that a book can explain emotion ten fold what a movie can.  I gave it 4.5/5 stars.  Also, I would recommend reading it first before you give it to your 10-year-old to see if  your kid is mature enough for it.  Twelve and up would be fine. 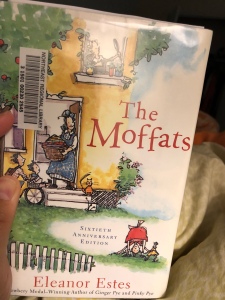 over from Sarah Mackenzie of The Read Aloud Revival.  My library had it, so I picked it up to preview for my own kids and possibly read aloud to them.  It makes a great read aloud because the chapters are basically short stories all about one family.  My kids enjoyed Chapter 3 about the boy who didn’t want to go to school, so he hopped a train to the next town.  (The boys made it home safely).  I didn’t read too many more chapters past that.  I will encourage my kids to read it later, and we may pick it up as a family again sometime, but now wasn’t the right time for it.  I feel like we are trying to cram so much into the summer as far as reading goes that we don’t have time for everything.  Maybe when the school year starts back.

Young Jane Young by Gabrielle Zevin.  I got this one as a kindle daily deal back in 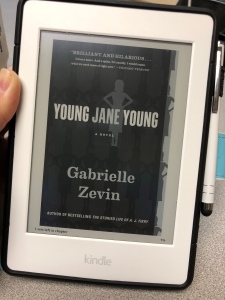 December I believe, and am just now picking it up.  I loved The Storied Life of A. J. Fikry, which I reviewed here, so I knew I would enjoy this one by the same author.  I was correct.  I read this book in two days, and I was not disappointed.

After a Monica Lewinski type scandal with a congressman, Jane Young needs to reinvent herself away from everyone that ever knew about her.  Turns out, you may not be able to run far enough away from your past, especially when the internet is involved.  This book is also written in four parts.  Part one is told from Aviva’s mom’s perspective.  I’ll admit that I had a little trouble following this at times because it skipped around to a couple of different time periods without notice.  One part was told only in the form of emails and only from one side.  It was very Guernsy Literary and Potato Peel Pie Society, and I loved it.  One part is told from the wife of the congressman which is a point of view often overlooked in media on the waves of a scandal.  And one part is told from Jane Young.  Bless her heart.  There were lots of likable characters that I could root for, and I was pulled into the story in just a few shorts pages.  I would recommend this book to almost anyone that wants a good book to read.  This is not a romance. 4/5 stars.

I participated in the #8intwo read-a-thon put on by  25infive Readathon on Instagram June 23-24, and I was able to read a complete eight hours!  I finished Young Jane Young as part of that, but I was also able to complete a couple of other things!  The second finish was the short story The Curious Case of the Copper Corpse by Alan Bradley.  This was $.99 on kindle and is only available by ebook.  It’s a short, fun spin-off on the Flavia de Luce novels by Bradley.  I love all of those, so I knew I would love this.  It took less than an hour to read and had all the usual wit that comes with the 11-year-old chemistry enthusiast.  4/5 stars.

Last to be finished for the read-a-thon was an audiobook: Life and Other Near-Death Experiences by Camille Pagan.  This was my first book by her, and I’m on the hunt for my

next!  I picked this one up on kindle unlimited (which prime members get one free book a month) and added the Audible narration to my purchase for $1.99 more, or it was on prime reading.  I consider this a total win and will tell you how you can do it for all of your kindle books at the end of this post.

Again, what would you do if you knew you were going to die?  This girl flipped her wig, but in her defense, she also learned two earth-shattering pieces of news on the same day.  I don’t think I would’ve handled things the way she did, but I like her style and I really loved the character.  I would also recommend this one to anyone. 4/5stars.

Ali read Mrs. Piggle-Wiggle by Betty MacDonald in no time flat.  I got it at the local Goodwill Bookstore for $1.99.  She enjoyed it and thought it was very funny.  She says that her favorite part was about the radish cure.  She would recommend it to anyone who likes funny books and thinks it would be good to read aloud as a family.

She also read Dork Diaries #12: Tales from a Not-So-Secret Crush Catastrophe by Rachel Renee Russell.  This is a beloved series for her and she owns most of them.  It never takes more than a day for her to complete any one of them, and I like how it keeps her reading. This is the latest in the series and should be available near you for your third graders and up.

So that’s it for June!!  I feel very accomplished with this list.  I’ve left off one that was a reread, but I am writing a separate post for that series.

Now, for the ebook/audiobook pairings.  When I checked out on Amazon buying the ebook and adding the Audible narration, it sent me to Kindle match maker where it pulled up all the ebooks that I have previously purchased that had and Audible narration available.  I bought a couple of them for $1.99 each, but they were all different prices.  This is a great option for all those ebooks that I’ve hoarded for cheap with good intentions but haven’t read.  Now I can listen on my commute.  When I tried to look up this feature, it took me to Kindle Matchbook for ebooks for $1.99 for which I have previously bought the hard copy.  This is a great option for books that I’ve given as gifts but would like a copy for myself as well, or maybe books that I loved but don’t want the hard copy cluttering my home.